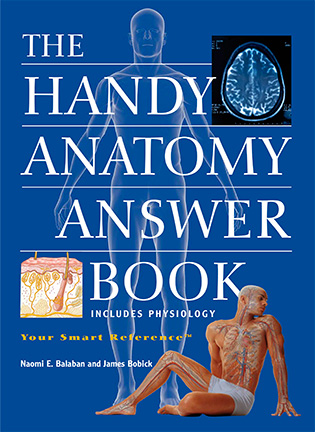 Описание: From basic biology and the lymphatic system to human growth and development, this comprehensive reference—organized by systems of the body—makes the sometimes perplexing nature of anatomy understandable through an engaging question-and-answer format. In addition to the science itself, the people and history behind anatomy are discussed. More than 1,200 questions are answered, including Do identical twins have the same fingerprints? What are the primary sensations of taste? What is the integumentary system? and How many bones are in the human body?
Pick up a magazine or newspaper, turn on the radio or television, or access medical and health information on the Internet and you will find that the human body is definitely in the news. Artificial hearts, dietary supplements, stem cell research, genetic engineering, arthroscopic surgery, and many other intriguing subjects on human biology and health are talked about daily. Our bodies seem to be constantly on our minds! The Handy Anatomy Answer Book is here to help you unravel the complexities and mysteries of how your body works.
Our interest in and understanding of the human body has a long and detailed history going back to the ancient Greeks Aristotle and Galen, who first studied the structure and function of our species. From this starting point, however, the scientific study of the body progressed slowly. It wasn't until the sixteenth century that the foundations of modern anatomy were laid by Andreas Vesalius; and it wasn't until the century after that when William Harvey discovered how blood circulates in the body. Finally, in the nineteenth century, anatomy and physiology became distinct scientific disciplines.
As techniques for making more accurate observations and performing careful experiments evolved, knowledge of the human body expanded rapidly. And as our knowledge expanded, so did the vocabulary to describe what medical doctors were discovering. Using the root languages of Greek and Latin, soon there was a plethora of complex terms describing body parts, their precise locations, and their functions.
The Handy Anatomy Answer Book helps make the language of anatomy—as well as physiology and pathology—more understandable and less intimidating to the general reader, while answering over one thousand questions on all the major body systems.
In this informative book, you'll find answers to such intriguing questions as: Who discovered how muscles work? What is the largest nerve in the body? How much air can your lungs hold? What are the primary sensations of taste? Who is considered the founder of physiology? How many bones are in the human body? The Handy Anatomy Answer Book also includes fascinating trivia. Do identical twins share the same fingerprints? What tissues in your body can regenerate? Does brain size affect intelligence?
We are pleased and excited to contribute another addition to the “Handy Answer” family. It is wonderful to be a part of the continued growth of this series, which began in 1994 with The Handy Anatomy Answer Book.
Contents